It’s taken rather a long time to get round to the third part of this saga. We’ve been away cruising between Greece and Turkey. We’ve had a great time but the days have been long, with lots of playing on the jet ski and other garage toys.

I hope you can still remember the afternoon of Galley Girl’s day from my last post – thank you for waiting so patiently for the evening.

Anyway, finally, here is the third and final part of the saga of A Day in the Life of Galley Girl: Skipper has everything under control after a long day of fixing mechanical glitches. He’s been in the water a lot, mostly unexpectedly, fully clothed…

All is calm as the owners and guests relax on deck with fruit, sweetmeats and tea.

What could possibly go wrong….?

Skipper has dried off and changed into a clean set of uniform after getting a soaking on the jet ski.  Our owner gives a silent nod: it’s time to leave. I clear away the table and leave everything, cups, glasses, dishes, in the galley, stowed as safely as possible in the sink until I can wash up and stack the dishwasher. I try to do this really quietly as the owner’s 20 year old daughter, after a long afternoon sunbathing and playing with the seabob, has gone back to bed.

Skipper and I retrieve the shore lines and decide to tow the tender on a long line as we are on another short hop to drop off the guests at the marina. The owner wants to drive. He puts the engines in reverse and in the process fouls the boat’s propellor with the tender line. This is awkward…and we’ve been here before today: see Part One and Two for previous propeller moments.

What has happened is that we now have a rope around the propellor of a 72′ powerboat. We won’t be going anywhere until the propellor is released. Skipper flies out of the saloon from where he’s been standing next to the owner who is at the controls, calling ‘Neutral!’ (i.e. engines not in gear) as he goes, strides to the side deck of the boat and jumps in…fully clothed with his Leatherman knife clutched in one fist – for, perhaps, the third time today? The owner’s young son’s mouth drops open, his eyes are shining; he can barely speak and he whispers ‘I feel like I’m watching a movie…’

Skipper exchanges his waterlogged uniform for swimming shorts. Our owner, concerned for Skipper’s safety, wants to get a professional diver out.

It’s all the challenge Skipper needs.

After a lot of diving with the knife between his teeth Skipper is exhausted but has managed to free the propellor. It’s been quite a day. We wearily up anchor to return to our berth in the marina and drop off the guests. That is, all but one guest: the former senior government minister’s wife will have dinner with the owners on shore. I finish stacking the dishwasher just as the marina breakwater comes in to view. It’s time to be on deck: fenders out, lines to get ready.

We’re tied up, warps, springs and bow line all secure, locked off and tidied. We arrived in the dark and we’re very pleased that our navigation lights that were overhauled last week have all worked. The owners, and their guest have all gone down below to shower. (That’ll be the grey water tank needing emptying again first thing tomorrow morning.) I’ve just gone down for 15 minutes of peace sitting in our cabin – no, 15 minutes of lying prone on my bunk, to be honest – when I hear a bit of a commotion going on up above. A sort of grunting and wailing.

Skipper has been down in the engine room checking the water maker. Or something. I pop up the steps to the aft deck at the same time as Skipper pops his head out of the engine room hatch.

Skipper climbs out of the engine room and we both move tentatively towards the saloon doors from where the sound is coming from. I slide open the door. Wow, that’s a lot of wailing….Skipper stands behind me and looks over my head.

The owner’s wife is slumped in a corner of the huge angular U shaped white leather couch. The groans and wails are definitely eminating from her direction. Her legs are sprawled and between them is standing the diminutive former senior government minister’s wife, her head leaning over the owner’s wife, administering eye drops from a plastic phial.

The owner appears, treading heavily up the stairs from the bedrooms down below, up into the saloon, the other side of Wailing Wife.

He smells very nice, I notice. An aftershave probably not spawned of the Lynx dynasty. More like Bulgari. There are several of those thick glossy coloured glass bottles with silver tops in their bathroom. HIs Bulgari nestles next to her La Prarie and Creme de la Mer face creams. She’s a big fan of Chanel too, Coco being the scent of the moment.

The weeping, wailing and groaning increases as the owner’s wife sees her husband.

“The shower…” croaks the owner’s wife.

The owner is breathing heavily, his scented showered skin emitting sensuous fumes of what I decide is definitely the Bulgari.

The owner’s wife convulses. “Not too much. No water!”

Skipper and I are both confused but we clearly both have the same thought and decide not to rush in with questions just yet. Silence, we have learned, is golden.

The diminutive former senior government minister’s wife, who is still trapped between the owners wife’s voluptuous thighs, has not spoken a word of English and very few in Turkish all day. Suddenly she pipes up.

“The shower tray has overflowed and the bathroom is flooded. The lady had to turn the shower off to stop the flooding and she has soap in her eyes because she couldn’t rinse the shampoo out of her hair.”

“Thank you.” She smiles.

The owner’s wife glares at me, but with just the one eye, this time.

More eye drops, more sympathy. I empty the already empty ashtray and give it an extra polish. Wine will help too.

Soothed with white wine and a ton of ice, bowls of nuts, (not mixed: ‘Dahling, we never mix our nuts’) and little napkins, the owner’s wife has recovered her sight. They all go off to dinner, leaving us to babysit the owner’s son.

Once they are out of sight we prise the owner’s son away from his iPad and Grand Theft Auto and tell him he’s coming out to eat with us. We need to eat: as responsible adults in loco parentis he has to come with us, obviously. He protests he wants to stay with his game and eat crisps. I do a deal: come with us, eat, and I’ll buy you an ice cream from that amazing place you keep talking about where they roll dollops of ice cream in front of you and mix it up with whatever you want: nuts, fruit, chocolate buttons, marshmallow, jelly babies, marzipan, hundreds and thousands, whatever you fancy….

We’ve been to dinner: the owner’s son is delighted because we ate at a restaurant where feral cats wander free-range and brush their tails on your legs as they scavenge under the tables. I think it may not be his usual eating out experience.

Skipper couldn’t face the hundreds and thousands on blue bubble gum ice cream so the boy and I went together to the amazing ice cream emporium. Have to say, it was pretty good. I had butterscotch with caramel nuggets. The boy now has blue lips with speckled bits – in a good way.

Back on board, I persuade him to get into pyjamas. Ticked that box! Phew. Ok, he’s still up on his iPad, but at least he’s in/on bed.

Skipper and I watch television. Literally. There is a film, but we’re past concentration. We’re watching the high gloss wood in the TV cabinet, the glass insets in the cabinet doors. There are moving images, I know, on this metre square slide-up screen – but this knowledge is on a plane I’m nowhere near.

The owners come back giggling, negotiating the passarelle with trapeze artist skills. They do it better at night than they do in broad daylight. They request wine, whiskey, ice. (No nuts.) Skipper opens a bottle of chilled white Sauvignon Blanc from the store in the wine cooler and I get the Johnny Walker. We wait discreetly behind the saloon doors as they carry on giggling on the aft deck.

They decide to call it a day. Hooray! I take the glasses and wine down to the galley. I’ll do the glasses in the morning: they can stay in the sink for now. Johnny Walker goes back in the owner’s cabin with the rest of the whiskey collection. I put chilled bottles of water by their bed, turn down the lights, fluff up the pillows, check that the blinds are down on the windows, and we say goodnight.

Skipper and I watch the stars for a moment, hand in hand, before starting towards the steps down to our cabin.

The owner’s daughter, in a tiny dress, and on gazelle legs opens the saloon doors. Her waist length silken hair swings as she does so. She smiles at Skipper. She’s fresh as a daisy – as she should be after a nearly six hour nap.

“I’d like to go ashore. To the club there..I’m meeting my friends.” She’s an angel. In a skin tight dress. “Of course…if it’s too much trouble…?”

Skipper lets go of my hand.

“Not too much trouble at  all.” Then he remembers. “Oh, we can’t – the tender’s not working.” (We got a rope stuck in its turbo jets this afternoon.)

Her face falls. Skipper thinks hard. “I could give you a lift on the jet ski?”

She nods with delight and her smile lights up the night. “That would be perfect! And don’t worry about coming to pick me up later. I can get a water taxi back!”

I hold the painter tight (the rope that you tie up with) so that she can step on to the jet ski behind Skipper. With her Jimmy Choos in one hand she wraps her arms around Skipper’s waist and they fly into the dark.

I pull open the cabin hatch door and get ready for bed.

Skipper returns. I’m wrapped in a sheet, watching the stars through the mosquito net. I listen to him tying up the jet ski.

Skipper has negotiated the mosquito net and the steep steps down into our cabin. He climbs up to his bunk. He mutters a sleepy ‘good night’. So much for romance. We’ve been up since 0630: a 20 hour day. I remember I haven’t set the alarm. It doesn’t matter. I will wake with the owner’s daughter’s return at around five a.m. and again at sunrise shortly after. And then we’ll start another day. 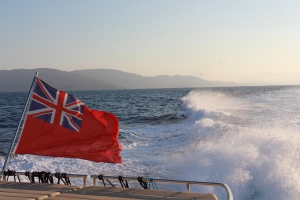