There is never a typical day, ever, on board a boat. The weather, sea state, maintenance routines and repair issues all have a bearing on how the day will go. And if you are working aboard, then of course the demands and whims of your clients or owners and their guests will dictate where you end up and when. Some days are more memorable than others however…

The alarm goes off. I’ve been lightly awake since sunrise. The oblong square of the hatch, which is also our door, is open as always. We drape a mosquito net over the space and the sunlight streaming in is softened by the mesh. The air conditioning booms into action with the thud that always makes me jump. My bunk is not much longer than me but surprisingly comfortable, in a dark den kind of way. Skipper sleeps above in the longer bunk, which is set at right angles to mine, above the washing machine. The cabin is cosy, to say the least. And not in the least bit conducive to romance.

Quick wash in the ‘shower room’ in our cabin. It’s all we need – a loo, a basin and a shower – but it’s the size of a telephone box and it doubles as our wardrobe for the few things we hang up.  Using the shower means emptying the ‘wardrobe’…and makes the cabin impossibly humid. Generally, if we’re at anchor, we shower on deck before the owners get up, but today we need to get moving quickly. The owners want to have breakfast early on shore at a beachside hotel at a small resort about an hour away. So it’s pull on uniform – always the same beige/navy/white combo of shorts and shirt – and prepare to up anchor. I go to the bow and press down with my heel on the electric button to start bringing up 90 metres of chain while Skipper starts the engines. As soon as the anchor is secure I lean out over the bow and untie the anchor ball – a plastic disc that shows other boats we’re at anchor – and we head for our next destination.

We drop anchor near to the beach where the owners want to go, using the winch handle to manually drop one big dump of 30 metres of chain and then paying out another 60 metres. Amazingly the owner and his family are able to sleep right through the noise of the anchor being raised and dropped again and there is no sign of life as yet. Their hearing is far more acute when it comes to footsteps – we have to walk as quietly as we can on deck, treading barefoot like stealthy cats. I lower the swimming platform (more electronic buttons) so that Skipper can float the tender off the platform where it stays when we’re underway, getting it ready to take the owners ashore. Then I go below in the main body of the boat to the galley to put the kettle on, moving like a cat burglar and setting the cups down very very carefully, trying not to chink them on the marble work surface.  At a mere 72 feet our boat does not qualify as a super-yacht and the galley is uncomfortably close to the master cabin. Skipper and I have breakfast on deck in the sunshine, enjoying the peace before the social whirl starts.

Still no sign of the owners. So much for the early breakfast. We want them up as we have a long day ahead and the later they get up the later we’ll be going to bed. Skipper suggests I put the washing machine on. The sump for all the waste grey water used is under the master cabin floor. The noise of the pump might help them get a move on.

Finally…they’re up. I make them coffee and empty ashtrays while they think about going ashore. Ashtrays must be emptied and wiped out after each cigarette. As a non smoker it’s my least favourite job. But, as the owner’s wife pointed out, ‘You must clean them because they smell very bad.’ Quite. They decide that they don’t want breakfast ashore after all and will breakfast on board instead. Skipper is dispatched ashore to search for bread. I go below and prepare a Turkish breakfast. (If you want to know what that entails, have a look in my August blog archives for the The BIg Turkish Breakfast.) It’s already over 30 degrees. It’s hot.

The breakfast dishes are cleared away, the dishwasher’s on, there’s more coffee on the go, the ashtrays are empty and the owners want to move to a different bay to collect guests to come on board. I come up on deck to help Skipper put the tender on the platform and bring the anchor up. The owner wants to drive the boat from the saloon while his wife sits outside on the aft deck. She asks me to bring her a bottle of water and grimaces when I hand it to her from the fridge, unscrewing the top for her. The grimace is possibly because I now have on my Dita Von Teese burlesque gloves: black fingerless sailing gloves that help protect from rope burns and minor bumps whilst still allowing me to fiddle with bits of string on the anchor ball and undo the shackle that secures the anchor.

Skipper put this shackle on the chain in place after a Kuby incident. Kuby is our day worker who was briefly promoted to second deckhand. (see August Archives for The Dayworker.)  On the first day or his promotion he turned up hobbling on a crutch, having called an ambulance to take him to hospital the night before. He had spent the previous day with us washing down the boat and complained that the work had made his foot ache. We weren’t very sympathetic and suggested he got himself an eye patch and a parrot to go with the crutch. On the second day he was given my job: managing the anchor. He had, he said, twenty years of experience as a deckhand. Ten minutes after leaving an anchorage, travelling at twenty five knots, the anchor deployed itself: Kuby had not tightened the winch and, quite apart from frightening the living daylights out of everybody on board, 150 odd metres of chain was now lying on the sea bed. On the third day Skipper happened to turn round to see the tender disappearing into the distance behind us: Kuby’s knot tying skills also need working on… After a few more mishaps and an apoplectic outburst from our owner he was fired. He has only recently been forgiven enough to return as a day worker.

We drop anchor and launch the tender. For some reason the anchor won’t drop manually on the winch and I use the electric button to slowly pay out 50 metres of chain. Skipper is sitting in the driving seat in the saloon looking through the windscreen and can’t understand why I’m doing this. I explain once we’re parked. Skipper can’t make the winch work either and drops into the anchor locker to see what’s happening. It seems the pin has fallen out of the winch and we won’t be able to pull the anchor up again.  He quickly puts a snub on the chain as it is in danger of  slipping and paying out its full 180 metres. BIg job to pick that lot up manually. Then he collects the guests in the tender and has a think about what to do. Meanwhile for me: more ashtrays, coffee and water dispensing. During the trip I’ve made up the master cabin bed and cleaned the master bathroom. I’ve polished the glass shower doors and the stainless steel fittings so that there are no water marks to be seen. I’ve hoovered and polished the stainless steel down below and emptied the dish washer. I’ve wiped the finger marks off the stainless steel fridge door (my second least favourite job) and the smudges on the high gloss galley cupboard doors.  The owner’s wife calls for bathing towels for the guests. I’m really hoping we don’t have more guests today as the last lot of towels have not come back from the laundry yet and supplies are dwindling. The swimming platform is lowered and the guests go down the steps to swim. Our owner calls for the toys to be brought out of the garage. We winch the jet ski out of the garage, Skipper manhandles the Sea-bob out – it weighs a ton – but it is fantastic fun. It’s a turbo-charged kind of rocket that you hold in front of you and it flies through and under the water. The owner’s young son is now out of bed and breakfast must be made for him. He always has the same breakfast and barely touches it. Every day: squeezed orange juice, fresh white bread and honey,  two fried eggs – and every day pretty much the whole lot goes in the bin. He is however, a very polite and personable child, and that counts for a great deal when we’re all living on board in very close quarters.

Breakfast is cleared away and scraped into the bin, the orange juice tipped down the sink: it doesn’t do to have a social conscience or to lie awake at night thinking about the starving in India in this job. I make up the boy’s bed, clean his bathroom and shower and sort his laundry, (nothing can ever be worn twice). One of my jobs is to help him choose what to wear. I think it must be rare to hear a pre-teen boy worry that his friends saw him in the same shirt last time they played together. I hear my name called and put the kettle on for coffee. One of the guests asks for Scotch on the Rocks and another for a Bloody Mary. I bring these with on a tray with an ice bucket, napkins and three small bowls of nuts. (The first time I shopped for nuts I bought an assortment including a bag of mixed nuts. When I put the mixed nuts in front of the owner’s  wife she made her ‘trod on a worm’ face and declared, ‘We never mix our nuts.’) Skipper meanwhile is ignoring the anchor problem for now and is busy in the water supervising the jet ski, buoyancy aids, flippers and demonstrating the sea-bob. Can’t be any fun at all. 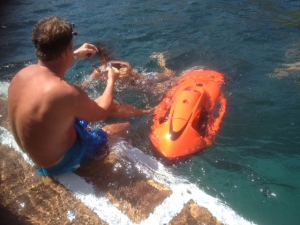 Coming next: The Afternoon. What could possibly go wrong?

5 thoughts on “A Day in the Life of Galley Girl. Part One: Morning”